Due to the upcoming Portaluca Winter Warehouse Sale, donations will be paused starting Thursday, February 2nd. Donations will resume on February 21st. We are not responsible for any donations left outside during this time.

We apologize for any inconvenience.

« Back to Blog and Events 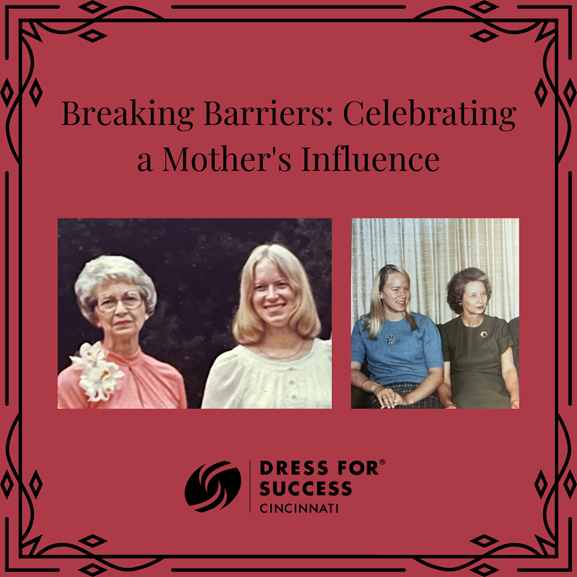 The author of this blog, Barbara Wagner, is the current Chair of the Dress for Success Cincinnati Board of Directors. Please enjoy Barbara's story of breaking barriers and how her mother's influence inspired her to overcome obstacles.

I was born and raised in Massachusetts, though both my parents were from Ohio. Although I didn’t appreciate all of my mother’s accomplishments until later in life, I have since learned that her accomplishments, which never got much attention, may have had a profound impact on my own. She grew up in a farm family in Adams County, attending a one-room school until high school and graduating from high school during the Depression.  Her four brothers and sisters stayed nearby and started farming, became mechanics or married farmers and mechanics.  But my mother, who had been salutatorian of her High School class, decided she wanted to do something different. She enrolled in secretarial school in Columbus, where she earned room and board, tuition and expense money by living with a family and babysitting and doing household work. After she graduated from secretarial school, she had several secretarial jobs and ultimately worked for the Dean of Oberlin College as what we would now call an executive secretary.  I think she always wished she had gone to college - especially after she married my father, who was a college professor -  but it just wasn’t possible for her under the circumstances of those days.

Growing up in a college town in the 1950s, I was aware that many of my friends’ mothers had gone to college (although, ironically, most of them stayed home to raise their children.)  In a college town, the number of degrees one had earned was probably a better indication of status than one’s salary.  As a result, I was always embarrassed that my mother was “only” a secretary and had never advanced further. After she became an empty nester, she considered going back to college to earn a degree in a field she loved: landscape architecture. However, under the advice of the head of the department, who told her she had probably already taught herself more than she would learn in classes, she ultimately decided not to pursue the degree. I was never aware of how many snide comments and belittling attitudes she may have had to endure for not being college-educated. Although she died many years ago, I can imagine both her hurt and also her grace under fire, and I have grown to appreciate her intelligence and grit.

Because of her own experience, my mother was determined that her three daughters would go to college, and I was lucky enough to be admitted to the first coeducated class at Yale University. I was thrilled that I was able to take advantage of this opportunity. For over 250 years, Yale had admitted only male students, but this was proof the world was changing. While many students, faculty and administrators were supportive of admitting women, there were some diehards who simply couldn’t accept that women could perform as well as men, or even think like men. “What is the woman’s view of photosynthesis?” one professor asked a friend of mine.  Another professor asked a female student which male student had written her paper for her, because a woman couldn’t have possibly written such a good paper by herself. Many alumni assumed women would just get married, drop out and “waste” the education that could be better used on male students. Many alumni also felt that admitting women would cheapen the value of a Yale degree.

Even in those heady days of Vietnam war protests, student radicalism and petitions, things were still changing slowly. My most memorable event was when I came across a group of students seeking signatures for a petition, a common occurrence on campus. As always, I stopped to read it. “Was it about civil rights? Stopping the bombing in Laos?  Free daycare?” I wondered. No, the purpose of this petition was to call for Yale Trustees to send the women students home. The petition stated that women belong in the kitchen and had no place on Yale’s college campus.  It took my breath away; I had realized that not everyone on campus was welcoming, but I had no idea that they wanted us all gone.

What goes around comes around.  My mother had not attended college due to economic circumstances and was scorn for her lack of a college degree. I was admitted to a prestigious college but was confronted by those who thought I had no right to be there.  Over my career, I have often been the only woman in the room and at the table. But nonetheless, progress continues.

It was only much later on that I came to learn – from a variety of sources -- that one of the best indicators of how much a person may achieve is how much their parent or other important role model has accomplished, especially through rising by their own hard work to a status above the one they were born into.  Over time, I have gotten to know many people who have impressive credentials who earned them simply by coming from the right family and getting opportunities dropped in their laps. However, the examples I value most are the friends and colleagues who have achieved their roles by working hard, overcoming challenges and staying motivated.  They may not have all the trappings of success, but they have the intelligence and wisdom that comes from self-learning and grit.  That is an apt description of my mother. She asked questions, learned that she had wisdom beyond her degrees, and never gave up. She has taught me a tremendous amount about overcoming barriers, believing in yourself and empowering others, just as she empowered me.

If you're looking to get involved and be empowered by a network of women, consider joining our EmpowerHER program. You can learn more about this program here.